The Montessori classroom provides a prepared environment in where children can be driven naturally to work and learn. The children’s inherent love of learning is encouraged by giving them the opportunity to be spontaneous, and engage in meaningful activities under the guidance of a trained instructor. Through their work, children develop concentration, motivation, persistence, and discipline. Within this framework of order they progress at their pace and rhythm according to their individual capabilities.

Acquiring a love of learning and learning how to learn, is our goal. With this in mind, we have organized our curriculum, which is more progressive than traditional curriculum. We have based our curriculum on the Maria Montessori teachings. The curriculum presents lessons simply and concretely in the early years, and is introduced again in a more abstract and complex presentation during the subsequent years.

When did Montessori begin? 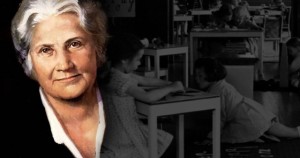 Maria Montessori, founder of the Montessori Movement, was the first woman to practice medicine in Italy. A scholar of biology, psychiatry, anthropology, and medicine, she graduated from the Faculty of Medicine at the University of Rome in 1896.

As a physician, Dr. Montessori was in touch with young children and became profoundly interested in their development. Through careful and exhaustive scrutiny, she realized that children construct their own personalities as they interact with their environment. She also observed the way they learned as they spontaneously chose and worked with the auto didactic materials she provided.

She studied children of all races and cultures in many countries around the world, soon seeing the universality of the laws of human development. She continued her observations throughout her life, widening and deepening her understanding until her death in 1952.

Maria Montessori was a scientist, and as a good scientist, she was earth-bound and highly spiritual in her pursuit of truth. Through her studies of educational methods, she declared two principles as the foundation of Montessori pedagogy: the universal characteristics of the human child, and the child as a unique, unrepeatable, respectable, and admirable individual to be unconditionally accepted as one of life’s most marvelous expressions.

The Montessori method has since spread to nearly every country throughout the world. The movement reached the United States in 1963. Although it initially spread slowly throughout the U.S., the number of Montessori schools has doubled over the past ten years. Currently, there are 1,377 accredited Montessori schools nationwide educating over 85,000 students annually. The Montessori approach has also been implemented as a magnet program in nearly 250 public schools to date.

She carried her message throughout the world, including the United States as early as 1912. After an enthusiastic first response, interest in the U.S. waned until a re-introduction of the method in the mid-1950’s, followed by the organization of the American Montessori Society in 1960.